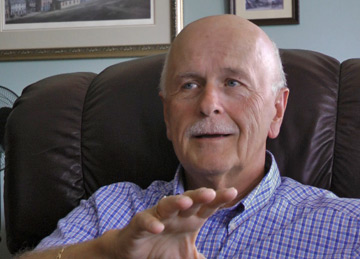 Cares for his wife

Age at interview: 63
Age at start of caregiving: 58

Mike (63 years old) lives with his wife in an adapted apartment. Sixteen years ago, Mike’s wife was diagnosed with multiple sclerosis (MS). She had lost her brother to MS so they had an idea of the disease. Currently she uses a wheelchair and a walker and needs frequent rest because of her illness. Mike has recently taken early retirement as it became more and more difficult to cope with the combination of the demands of his work and caregiving. The couple is now adjusting to the new routine.

Having acquired quite a bit of knowledge about the disease, Mike and his wife decided to prepare for her illness and its progression by moving to an apartment designed by them. Mike’s wife stopped working about 12 years ago as a consequence of her disease.

Up until about two years ago, Mike used to travel frequently due to his work as a salesman. During his travelling periods, Mike’s wife mostly took care of the day-to-day responsibilities at home. When Mike felt that it was time to be more present at home to be able to help his wife, he notified his work six months in advance and took early retirement. Mike knew that it was not going to be easy to make the transition in his responsibilities from work to home, and he still finds it difficult to make the necessary adjustments. At the beginning he wanted to do too much for his wife, even when she did not necessarily require help, and Mike’s wife remains as active as possible. She has outings with friends, swims regularly and values her independence very much. The couple is now working on a new balance between their own time and the caregiving tasks. Mike is trying to take a step back from the caregiving and take more time for his own activities, for example, he recently learned to play golf. Mike still struggles though, with the guilt he sometimes feels when going out on his own while his wife remains at home.

Mike had completed a care for the caregiver course to better equip himself when he was a caregiver for his mother who had Alzheimer’s disease. This course was a real eye-opener for him, and it was there that he had learned for the first time that it is ok to say no and to take your own time in spite of the feelings of guilt. What was useful for him as well was that his wife kept a notebook up to date with all developments and contacts that she had had since the time of her diagnosis. Dealing with health insurance companies had taught them that all or most affaires related to their illness had to be written down. Mike had also participated in a caregiver support group from the MS society but somehow the setting and timing of this group did not work out well for him.

Mike has deliberately made the choice to say ‘“we” have been diagnosed with MS disease’. And he has adhered to this phrase, even if sometimes he gets surprised reactions from other people.  He says that it is easier to accept and deal with the situation once you feel that it is not only the care recipient that has the diagnosis but that you, as a caregiver, are also affected by the illness. Michael and his wife try to continue leading a normal life as much as they can. They remain active and enjoy their free time, as they both realize that their lives may still change in a flash.